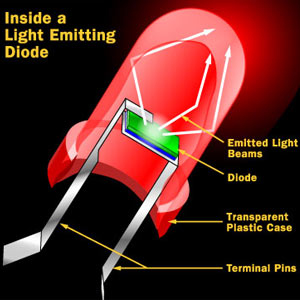 A light-emitting diode (LED) is a two-lead semiconductor light source. It resembles a basic pn- junction diode, which emits light when activated.[7] When a fitting voltage is applied to the leads, electrons are able to recombine with electron holes within the device, releasing energy in the form of photons. This effect is called electroluminescence, and the color of the light (corresponding to the energy of the photon) is determined by the energy band gap of the semiconductor.

A LED directly converts electricity into light. LEDs are made from joining together two semiconducting materials. On one side is a 'p-type' semiconducting material on the other side is a 'n-type' semiconducting material. P and N stand for positive and negative. These different materials are made by taking a pure semiconductor such as silicon, then mixing in small amounts of impurities such as Aluminium and Phosphorus, in a process known as doping. As electrons from the electrical current cross the boundary between the P and N materials the electrons move to a lower energy state and emit light of a certain colour. Different materials such as silicon carbide or gallium-nitride and different doping methods result in different coloured LEDs.

Because LEDs typically only emit monochromatic light, or light of a single colour, there are a couple of different methods to get white light (which is a mix of colours) from a LED. One method is to carefully mix up several different colored LEDs in a single light fixture to simulate white light. Another method uses a single blue or ultraviolet LED in combination with a phosphor, which absorbs the blue light and emits a broader spectrum of white light (similar to fluorescent lamps).

Pros and Cons of LED lighting

Products claiming to be direct replacements for an incandescent of a certain wattage can often produce light levels well below the typical performance of the claimed equivalent. Even when a manufacturer's light output claims are accurate, the number of lumens may not be consistent with the incandescent wattage it is recommended to replace. As a guide, the minimum lumen output for incandescent equivalence claims specified by ENERGY STAR® in their Program Requirements for Integral LED Lamps document is included below:

The colour temperature and Colour Rendering Index of a light source determine the appearance of the light and the objects being illuminated. Incandescent bulbs generally generate a yellowish "warm white" colour with a CCT of around 2700K and a CRI of 100 (as incandescents are the reference light source used in the CRI metric). LED lights offer a much broader range of colour temperatures, ranging from warm white to natural (sometime's called 'pure' or 'daylight') white to a bluish cool white. Different colour temperatures may suit different spaces and tastes. In general, warm white may be a more appealing choice for spaces with lower levels of light while pure and cool white lighting tends to complement spaces with high levels of light or sunlight.