Color temperature of this bulb can be adjusted from 2700K to 6500K. Consumes 7.2 Watts of power using twenty four x 5630SMD LEDs. Includes hand held RF Variable Color Temperature Remote (Requires 2 x AAA batteries -- Not Included). Control range is 65 feet in open air. Multi-Zone function to control up to four separate zones of VCT LED bulbs that can be linked and controlled by one or several wireless remotes or smartphones with the Wi-Fi LED Controller Hub.

Skip to the end of the images gallery 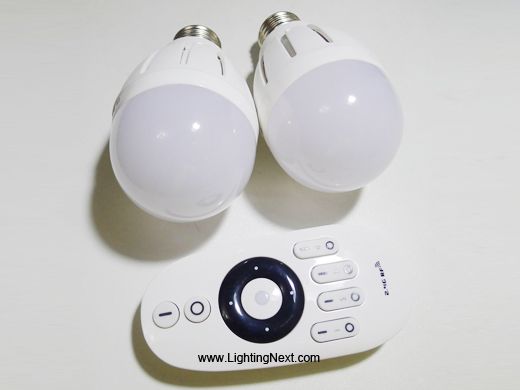 Skip to the beginning of the images gallery
Details

Linking a Light to the Remote
1. Switch off the main power supply to the light.
2. Restore power and within 3 seconds, choosing one of the “Zone On” (–) buttons, keep the button depressed until the light begins flashing. It will flash white 2 times, indicating that the light is now linked to that numbered zone control and can be controlled via the wireless remote.

Activating a Zone
To activate a specific zone, depress the “Zone On” (–) button. The zone is now active and remote commands will only affect lights linked to that zone.

Unlinking a Light to the Remote
1. Determine which zone the light is linked to. This is easily done by testing the Zone On/Off controls for each numbered zone on the remote.
2. Switch off the main power supply to the light.
3. Restore power and within 3 seconds, choosing one of the “Zone On” (–) buttons, until the light flashes 10 times, indicating that the light has been unlinked.

Note: The wireless remote operates using radio frequency. The remote controller’s use is not restricted by normal obstructions such as walls, doors, etc. Once programmed they can be installed anywhere in range of the remote (up to 65 ft. or 20m).